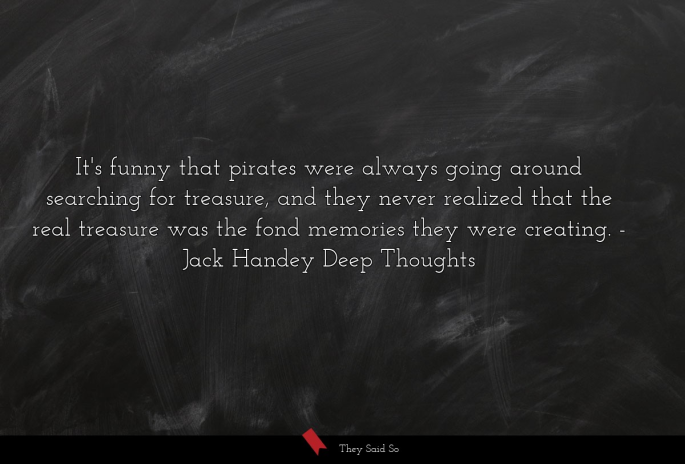 Circle of Block Exercises: “Go With It”

16 exercises, 16 reps each
Overhead Press
Curls
Block Burpees
Hodors
Leg over block
Jump over Block
Goblet squats
Superman on the Block
Nipple Scrapers on the Block
Kettle Bell Swings
(If you remember the other 6 block exercises, please put them in the comments below.)

Merkins to the count of 10.

One person, and only one, says the number after each merkin. Count goes back to “1” if two people talk at the same time.

Heroes and Villains on Hoffa Hill

(This was ok, but not as strenuous as expected. I probably won’t do it again.) 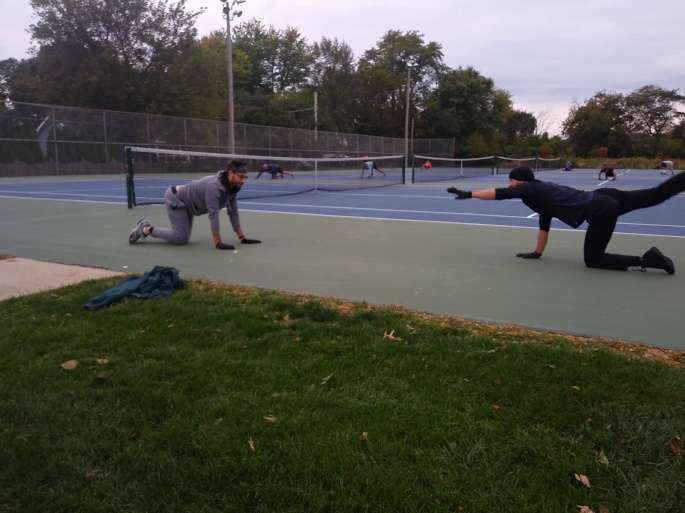 Duck walk to the Tennis Courts

Duck walk to the other tennis courts

Lest one think there was no method to the madness, these exercises were all core and back focused, giving a good work out to the stabilizers that we depend on to not hurt ourselves. With any luck we all escaped injury this time around and helped work those muscles that will keep us from injury in the future.

COR / NOR / COT: Prayers for strength, courage, and endurance, for the week ahead — for unity for our nation and our people and healing for our president — that we may be examples of brotherly love and faithful witness amidst trying times — for TAR PIT, it’s growth, and our finding of the people who most need this in their lives. 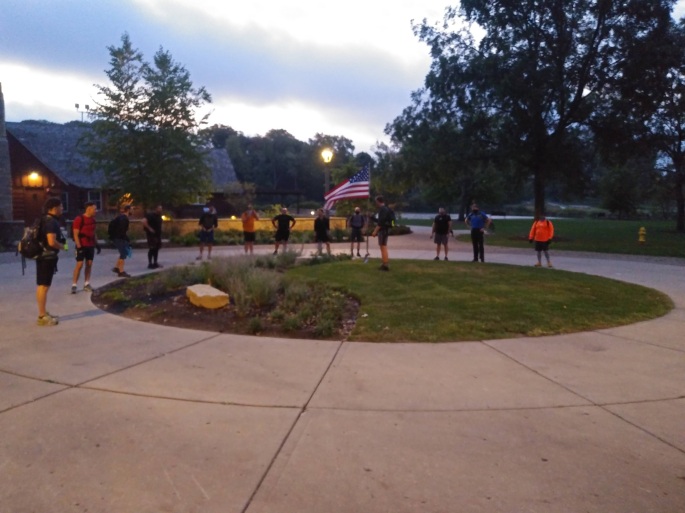 All woke up slightly earlier than usual to commemorate three years of consistent effort at AO-MASTODON and to connect that with the breaking of new ground at AO-TAR PIT. Shovel flag in hand, they shouldered their rucks and started the trek. Having expressed their joy and affection in the heart-language of concrete blocks on Thursday, today they chose that brotherly, common language of time-under-load called “ruckership”.

Across differences of life experience and opinions about acceptable coffee-drinking pace and concerns about the Q’s sense of direction, the conversation flowed freely in the Gloom as the PAX rucked double-file. Work, unemployment, parenting, gardening, and the whole round world was ranged in our broad collection. YHC marveled at the assortment of interests and talents on display in such a narrow subset of individuals as had descended on F3 Wheaton in the past year. The miles ticked off quickly as the fellowship sped on in merriment.

Having received intelligence of a potential large object that could be “returned” to the dig-site of our mascot, we made a quick detour to try our strength against a discarded remnant of Perry (a broken chunk of telephone pole). While our heart was in the attempt, and even as the best among us were digging deep to soldier on at all costs, we ultimately saw wisdom less than 200 yards later. Nails, bulk, and the inability to get enough men underneath the load convinced us to let Perry repose in the Gloom only slightly nearer to our destination than before. We did however manage to bring a considerably smaller but no less symbolic relic of Perry along with us, and traded off carrying the more manageable load.

Crossing the new AO we wandered out the other side on to side streets and down dirt paths (even as the PAX’s doubts began to mount once more). But we had arrived at that forgotten remote spot where Perry had been unearthed years before. Our resident historian-bard, DaVinci said a few appropriate words to mark the occasion, and we set our relic adrift on the waters as the dawn rose.

Returning to the TAR PIT, Archive lead us in a prayer of gratitude and hope, as we asked for blessing on this AO and to the PAX who would labor there in the Gloom. Then, flag planted, and mindful of the time, we celebrated the moment with some Thrusters IC, before beginning the return trip to be present for the beatdown that was soon to take place at MASTODON.

The route home was direct, but hilly. YHC, unable to shake his one year of cross-country training, took it upon himself to charge up every hill of significant speed, exhorting the rest of the PAX to do the same. Flagging energy, but excellent pace saw the PAX quickly returned to their starting-place, to be greeted enthusiastically by the PAX who held down the day’s regular schedule. Partnering up, they moved seamlessly from Rucking to Blocks, to cap off not just an historic day, but an historic month for F3 Wheaton. And all before breakfast.

The PAX spent, they sat down to feast on burritos and (eventually) donuts and coffee. The energy of the day seemed a good omen for the group as we turned to our dual objectives of growing into two AOs and weathering the deepening Gloom of another Chicago winter.